Despite Labour’s opposition, our campaign has been incredibly successful with huge support from local residents, active travel charity, Sustrans, and the Bristol Cycling Campaign. But now, with just days to go before the local elections on 6 May, the Bristol Labour mayor and local Labour candidates have distributed a letter to local residents claiming our articles on the Callington Road Link are false and they have no plan to build a road along the former Brislington Railway Line!

Here are the facts:

Oct, 2016: We first write about the former Brislington Railway Line in our regular, community newsletter, Focus on Brislington West, describing the space as potentially a fantastic asset for Brislington, providing a safe and pleasant green route for walkers and cyclists from Whitchurch to the City Centre. 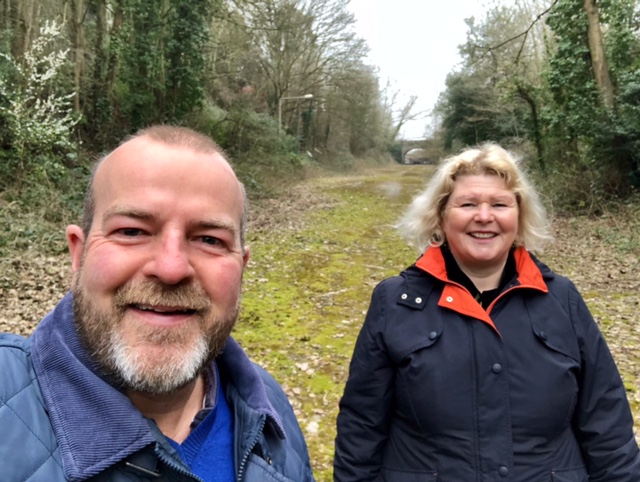 May, 2017: The Regional ‘metro’ mayoral elections take place. Together with Bristol City Council, the dormant Callington Road Link idea is resurrected as part of the new West of England Joint Transport Plan.

Oct, 2017: We meet representatives from Sustran’s and the Bristol Cycling Campaign to discuss our Greenway ideas, which receive solid backing from both organisations.

Nov, 2017: We launch our petition opposing the Callington Road Link and supporting the Brislington Greenway. This petition currently has over 2,550 signatures. No Labour candidates have signed it.

Dec, 2017: We hold a cross-party meeting with other Brislington councillors and decide to organise a public meeting.

Dec, 2017: We meet John Grimshaw, founder and former CEO of Sustrans to walk the route of the former Brislington Railway Line and help him take measurements and design an active travel corridor.

Jan, 2018: Andrew chairs a packed, public meeting at St. Peter’s Methodist Church. Disappointingly, Cllr. Jos Clark is the only local councillor who speaks in favour of the Brislington Greenway. Her suggestion of using John Grimshaw’s active travel designs, even on a temporary basis, is dismissed by Labour Cabinet Members, Nicola Beech and Mhairi Threlfall. No current Labour candidates attend this meeting.

Feb 2018: We make a campaign video with local residents’ group, SPRING (Sandy Park Road Improvement Neighbourhood Group) This video has been viewed over 2,500 times. You can view it here: https://youtu.be/qAd5Ss1BGno

Feb, 2019: The public consultation on the Joint Transport Plan for the West of England commences. The document clearly states the intention to construct the Callington Road Link.

Dec, 2019: We present our petition opposing the Callington Road Link at Full Council. Labour councillors try to prevent the petition from being heard but are overruled by council legal services.

The Callington Road Link is mentioned 15 times in the document. For example, on p51 it states, ‘On the A4 Bristol – Bath corridor through Brislington, road space will need to be reallocated to accommodate mass transit services by diverting through traffic onto the Callington Road Link’. It is also mentioned on p133, p171 and p179. You can view the 187-page document here: https://travelwest.info/app/uploads/2020/05/JLTP4-Adopted-Joint-Local-Transport-Plan-4.pdf

May, 2020: Labour Cabinet Member for Transport, Kye Dudd, writes to Andrew, rejecting our petition and confirming the plan to build the Callington Road Link.  He says, ‘On corridors such as the A4, road space will need to be reallocated to accommodate, in the medium term, metrobus services, and mass transit in the long term. This reallocation of road space will be made possible by diverting some traffic onto the Callington Road Link’.

July 2020: We meet Liberal Democrat regional mayoral candidate, Stephen Williams, on site, who agrees with our Greenway proposals and promises to cancel the road scheme if he is elected on 6 May.

Oct, 2020: We hold a meeting with the Bristol City Council project manager working on the Callington Road Link. During this meeting, the project manager sets out the key aspects of the scheme he has been working on for several years including a one-way road from Sainsbury’s to Tesco along the former Brislington Railway Line, the removal of the Sandy Park Road humpback bridge to be replaced with a new, busy crossroads and the removal of the right turn from Brislington Hill onto West Town Lane.

Dec, 2020: Bristol East Labour MP, Kerry McCarthy, writes to a local constituent stating, ‘I am not willing to come out in opposition to the Callington Link Road proposal’.

Jan, 2021: At Full Council Andrew asks the mayor why he is persisting with the Callington Road Link when we have a climate emergency. The mayor avoids answering the question.

Feb, 2021: We hold a follow-up meeting with the Callington Road Link project manager. The plans for the road link are reconfirmed together with a timeline for delivery. Following a public consultation in 2021, construction work is due to commence in Sep, 2023.

Apr, 2021: Mid-election, local Labour candidates distribute a letter from the mayor and themselves, claiming there is no plan to build the Callington Road Link!