Bristol Liberal Democrats work all year round - not just at election time - on important local and city-wide issues.

Ian Townsend was selected by the Bristol Liberal Democrats to stand as the candidate to represent the ward on Bristol City Council in the local council elections in May 2016.

Ian, who grew up and lives in Redfield and went to school in the ward - led an enthusiastic and hard-working local campaign team of party members and other supporters and volunteers.

Ultimately, the Labour candidate prevailed in the ward in the election. The post-election edition of the ward newsletter - Focus on St George West - which also included a pre-EU referendum article, is available onilne (PDF).

If you have any local issues, or if you would like to help with a local campaign or help with the  local Lib Dem team, please contact us.

For local news, check out the free monthly newspaper that has been launched for local residents, St George & Redfield Voice.

The local team gathered signatories for a petition to finally replace the swimming pool East Bristol was promised a decade ago when the now derelict Speedwell site was closed. Following the 2016 election, a new petition was set up, led by local residents.

Read what happened next on the petition page. 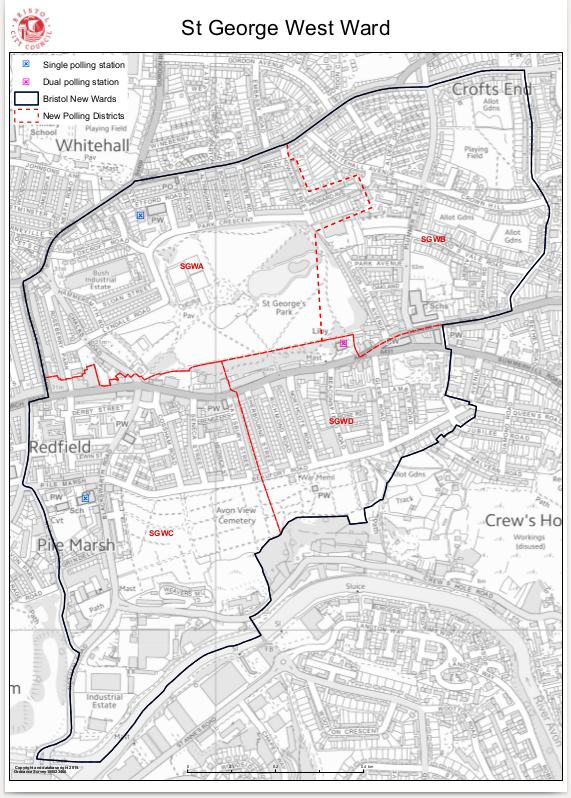 'St George West' is a new single-councillor ward for the May 2016 council election. This followed a review of boundaries in the city after years of population growth.

It is made up of the western parts of the old ward that shares its name. It covers St George Park, the upper end of Church Road (from the junction at Avonvale Road to just beyond the Fountain), Plummers Hill and parts of Crofts End to the north, down to the River Avon to the south, and including parts of Redfield in the south-west.

You can explore the city's new ward boundaries using Bristol City Council's maps service, or click on the map for a PDF file.