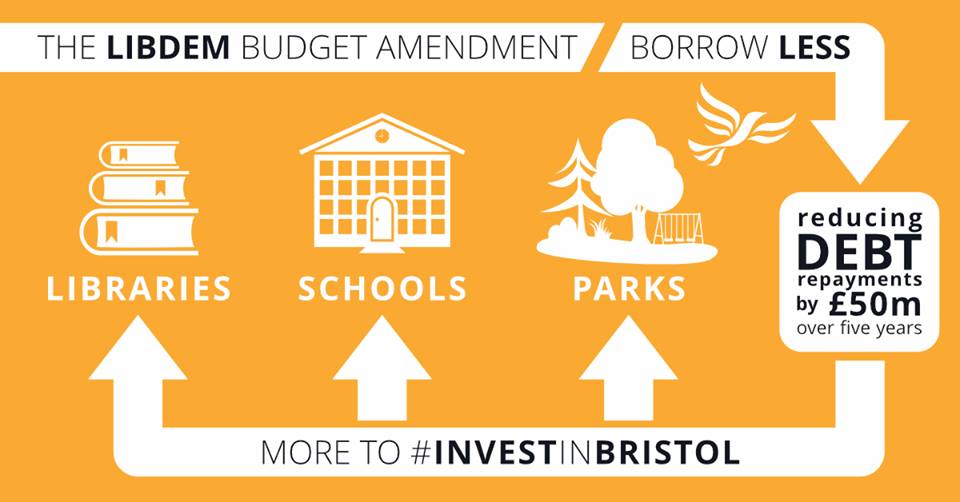 But the Liberal Democrats are proposing a substantial change to the Mayor’s austerity budget which would see planned cuts to libraries and parks halved and new money to be invested into aids and adaptions to help people stay living in their homes, new primary schools in south Bristol where new homes are planned, and funding to protect the city from flooding.

The Lib Dem plans would see new money from developers being used to support capital projects (Community Infrastructure Levy CIL) as well as cutting a new 'contingency fund' set up by the Mayor, on top of the £20m contingency the council already hold. The Lib Dem plan will see the council needing to borrow £50M less over the next 5 years – that is £300 less debt per Bristol household.

By borrowing less, the council pays less in debt repayments (capital financing) which will allow it to invest an extra £6M into parks and libraries, £6M into new primary school places and £1.9M into social care and aids and adaptions to help keep people living in their homes. In total, the Lib Dem plan would see £14.5M in total invested over the next 5 years into vital services while reducing the councils borrowing by £50M.

Previous budget amendments by the Liberal Democrats, although voted down by political opponents, have then been taken up and subsequently used by officers to help balance the budget. This has included increasing the tax base through more realistic forecasting of new homes and this year adopting a 10% over programming of the capital programme to reduce the call on borrowing.

Cllr Gary Hopkins (Knowle), Leader of the Liberal Democrats on Bristol City Council said: “We believe that austerity has gone too far and we should not use Government funding cuts as an excuse to make unnecessary service cuts. Our amendment will help protect hard-pressed services so I hope every councillor will put aside party differences and support this for the sake of our city.”

Cllr Tim Kent (Hengrove & Whitchurch Park), Bristol Lib Dem Finance spokesperson and mover of the amendment said: “The Mayor is proposing a major hike in borrowing which our children, and their children, will be left to pay off. Our plan sees this being cut by £50M, that will reduce the debt the Mayor is expecting all of us to pay by £300 per household. Instead of unnecessary borrowing, we will save vital services and even invest in new services such as new primary school places and aids and adaptions to help people stay living in their homes.

Cllr Anthony Negus (Cotham), Lib Dem Deputy Leader on Bristol City Council and seconder of the amendment said: “The current plans for parks and libraries is to cut them to the bone. Our proposal will reverse about half the proposed cuts to come allowing us to ensure parks are maintained and libraries stay open.”