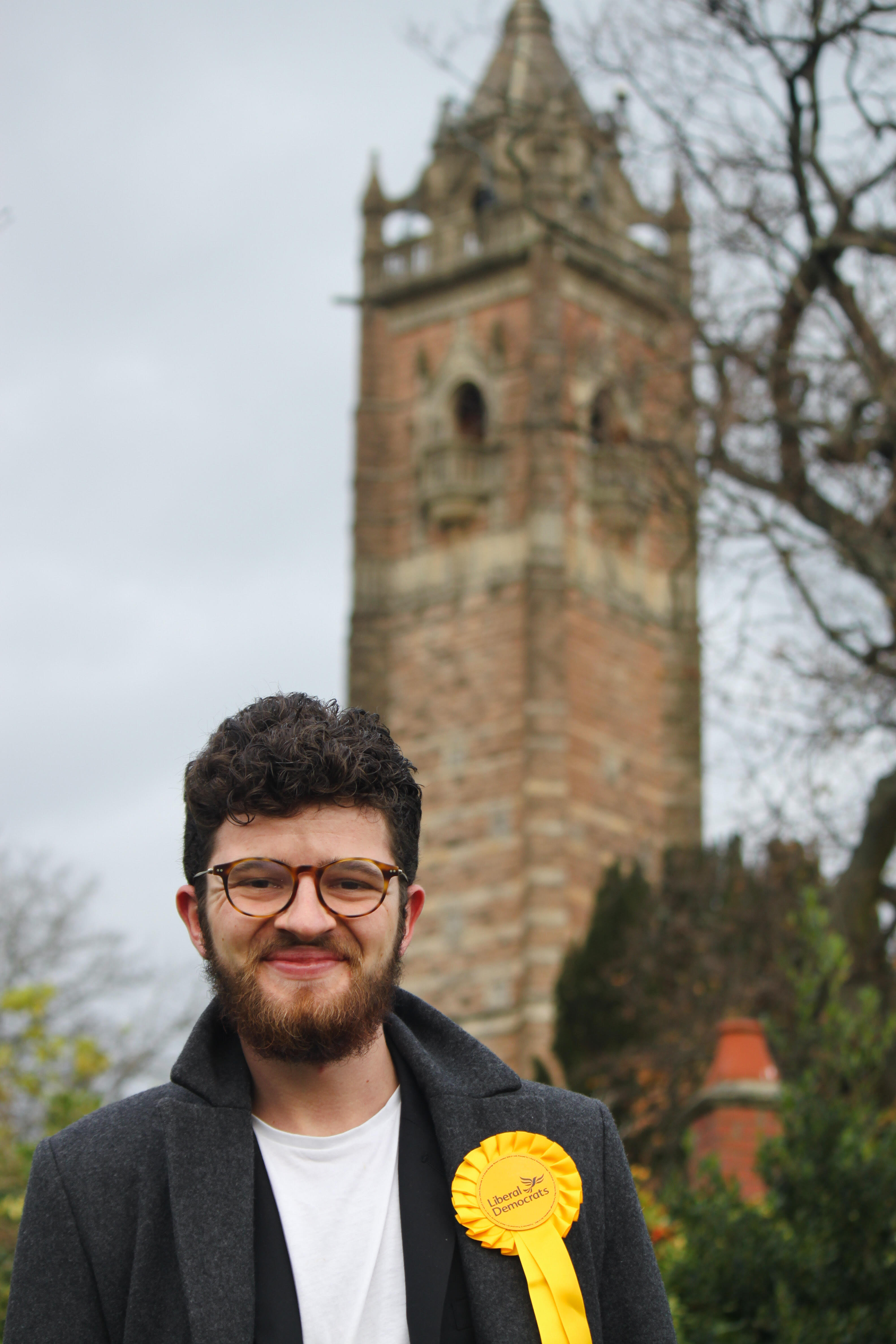 Cllr Alex Hartley is a committed community campaigner, who is working hard in our area. Formerly a pub manager, then in IT recruitment, he now works in local politics and is determined to carry on the work of former councillor, Mark Wright.

Alex says "I'm very thankful to local residents for electing me to follow Mark as Councillor for Hotwells & Harbourside. H&H is an area of contrasts - high rise penthouses sit alongside homelessness; beautiful views next to areas of deprivation; where active communities often end up fighting an out of touch Mayor's office. It's a ward that needs strong representation in the Council, and as former parish councillor, I know how vital strong representation can be. I will be your voice in City Hall - championing your causes and our area"

"My priorities for the ward are:

* Fighting the Mayor's plan for Cumberland Basin, which rides roughshod over the local community's views

* Improving the green spaces such as Brandon Hill

* Trying to fix recycling and waste services across the ward

* Working with the Police to try to reduce crime

* Ensuring the Council properly fixes the Chocolate Path, which has now been shut for over 3 years!

Alex is out and about in the ward meeting local residents, but you can also contact him to talk about his priorities for the ward, or your local issues; 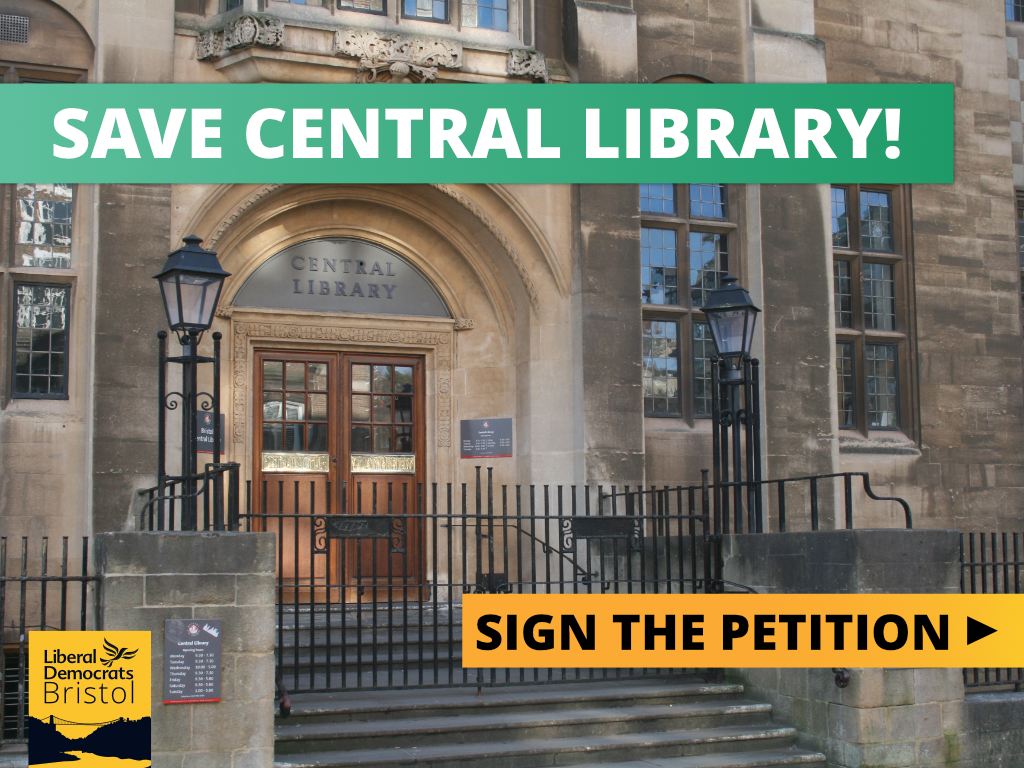 First Bus, the company that provides the vast majority of bus services across Bristol, has announced that it is immediately cutting over 1,400 bus services. This is following the collapse of Bristol Community Transport a few months ago. Many thousands of residents will be affected by the bus cuts, coming just weeks before the introduction of the Clean Air Zone in Central Bristol.

The Bristol Liberal Democrats are calling for Bristol, and the wider West of England Region, to follow the successful examples of London and Manchester and embrace bus franchising, which will put control of the routes and prices in the hands of local residents, rather than bus company executives. 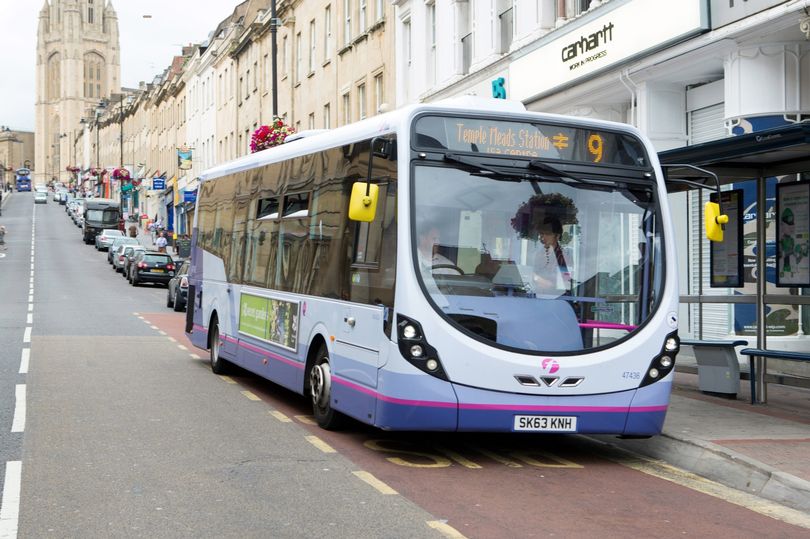 Cllr Alex Hartley wants to keep in touch with his residents in as many ways as possible. He welcomes people contacting him either via phone or email, but he also wants to be available to meet residents face to face. He will be holding multiple surgeries a month, of which the details can be found below. 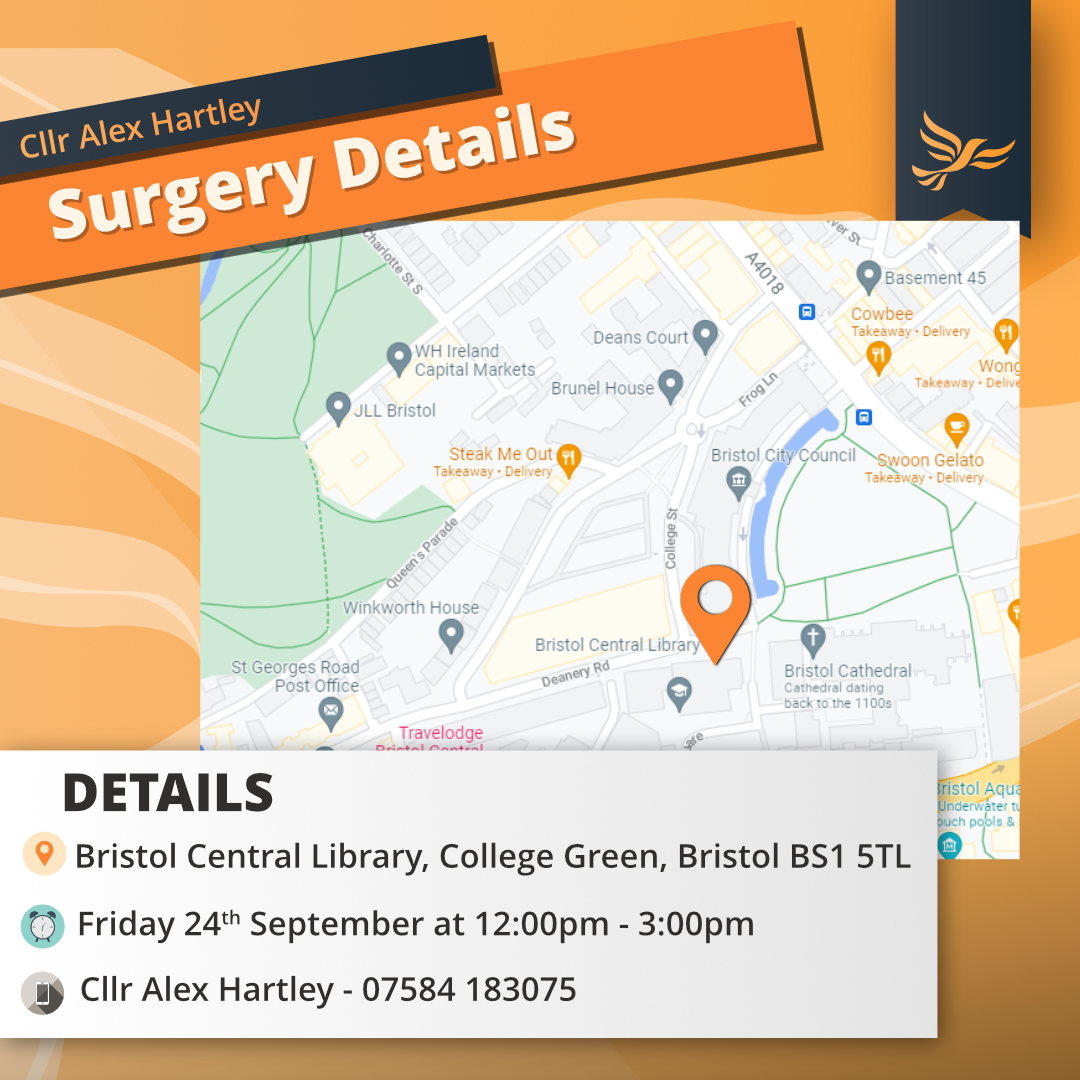 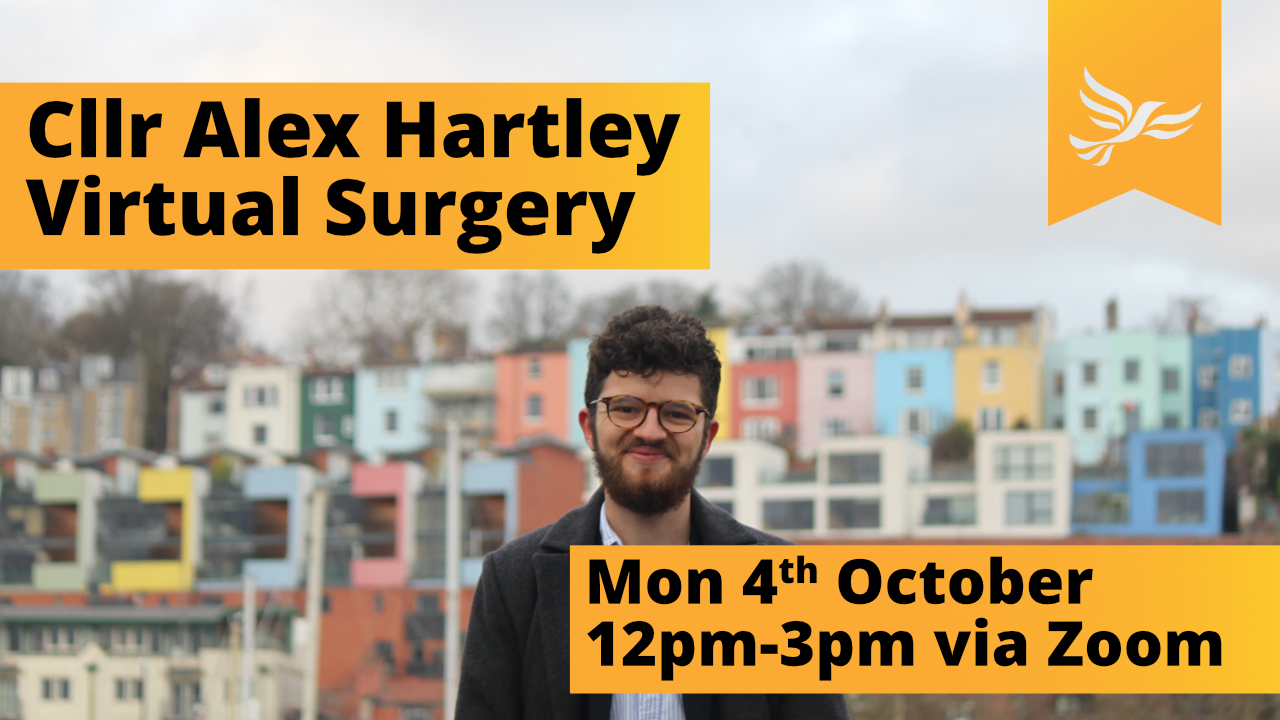 After 16 years as your councillor, Mark Wright is retiring. Over the last 6 months, Mark has been showing our new candidate, Alex Hartley, the ins and outs of the council and the ward, and showing him how to be a good councillor. They have already had success together, with Alex's campaign on the cladding scandal being widely publicised in the local news, and Mark's motion to full council being approved unanimously. They have been working together on a new campaign to fight the Mayors destructive plan for Cumberland Basin, and have been working hard to protect and clean up our green spaces on Brandon Hill & Cumberland Piazza.

This May you have the chance to continue the strong local Liberal Democrat tradition in the ward by voting for Alex Hartley to succeed Mark Wright.

Will you be voting for Alex on May 6th? 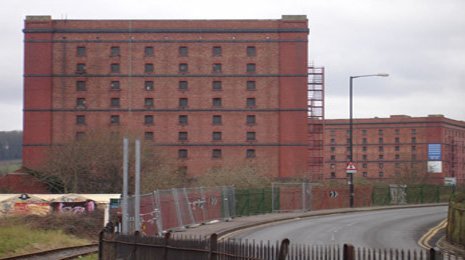 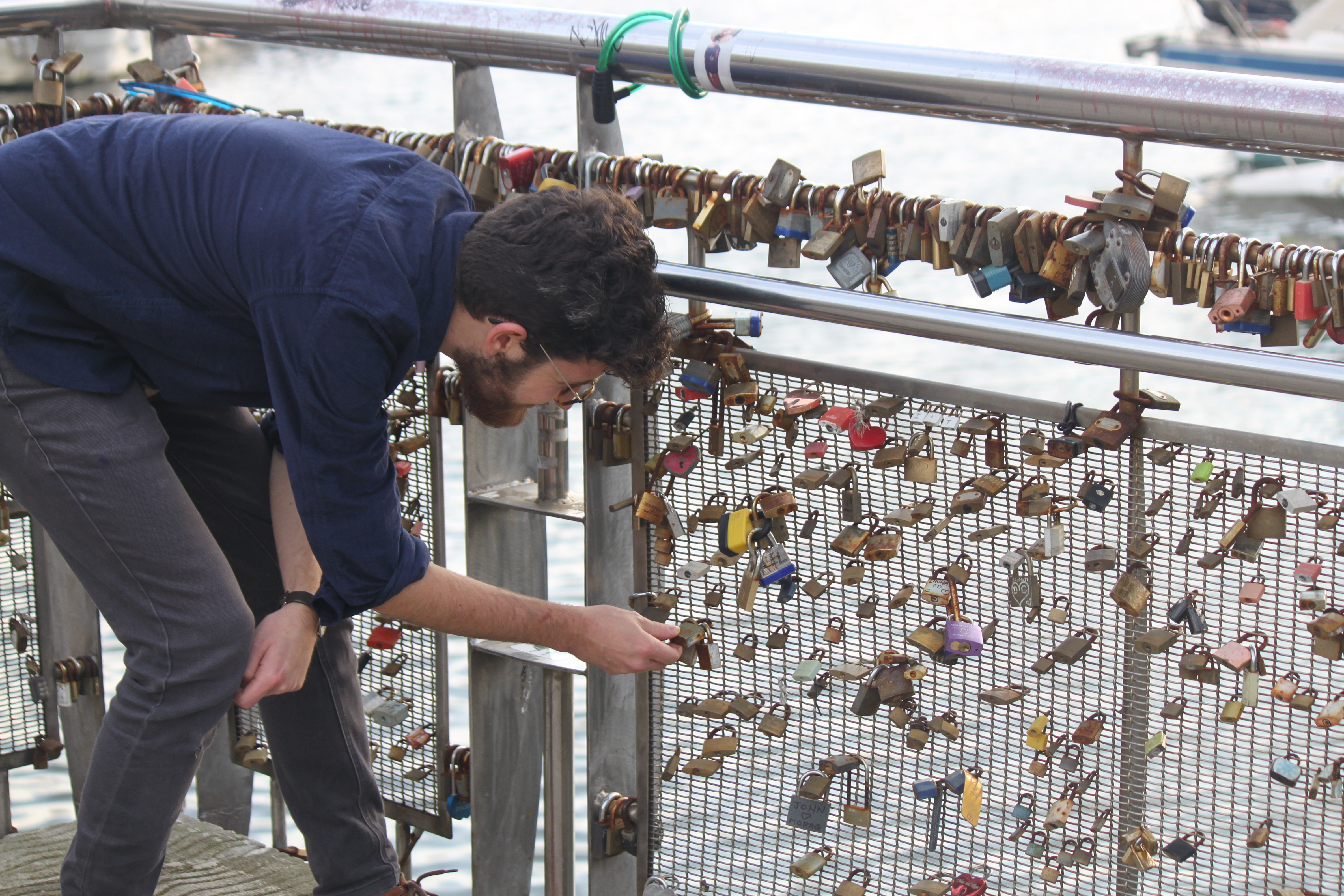 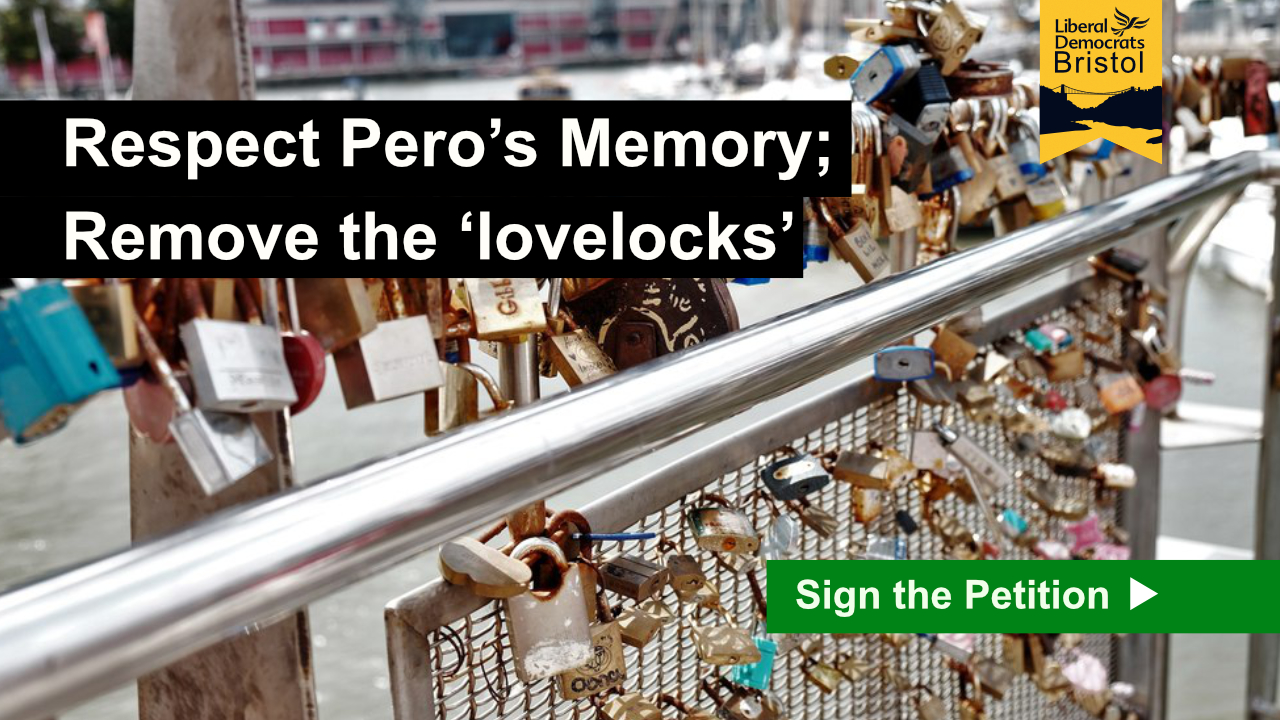 Committed community campaigner, Alex Hartley, has been selected as the Lib Dem candidate for Hotwells & Harbourside for the May 2021 local election. Alex, who is already working hard in our area is formerly a pub manager, who then worked in IT recruitment, he now works in local politics and is determined to carry on the of work of Cllr Mark Wright now that is retiring.

Alex says "I'm really pleased to be selected to follow Mark in Hotwells & Harbourside. H&H is an area of contrasts - high rise penthouses sit alongside homelessness; beautiful views next to areas of deprivation; where active communities often end up fighting an out of touch Mayor's office. It's a ward that needs strong representation in the Council, and as former parish councillor, I know how vital strong representation can be. I want to be your voice in City Hall - championing your causes and our area"

His priorities for the ward are:

Cllr Mark Wright said "It is great to welcome Alex to the Hotwells & Harbourside team. His energy and drive will allow him to be a great voice for the community that I had the pleasure of representing for the last 15 years. I have no doubt that his experience on campaigning on local issues will mean that he will be elected next May"

Lib Dem candidate for the West of England Mayor, Stephen Williams said "While I had been immensely looking forward to representing the community of Hotwells & Harbourside again, unfortunately the delay to the local election has changed the situation. I feel I can best help the local community by improving public transport, encouraging investment in jobs & skills and building more affordable housing, all things I will be able to do as Regional Mayor. I have every confidence that Alex will continue our fight against a Mayor that ignores the community's views."

Although Alex can't meet local residents at the moment due to lock-down, you can contact him to talk about his priorities for the ward, or your local issues by calling him on 07767 058857 or emailing him at [email protected]

It is thought that hundreds of residents in Hotwells and Harbourside may be affected by the Government's poor handling of the cladding scandal.

Fire safety is essential, yet the current system in place to identify and remediate cladding and fire safety issues including dangerous cladding is not only perilously slow, presenting significant safety risks but is also leaving thousands of leaseholders facing financial ruin.

The complete lack of urgency and comprehensive action by the Government on this matter is unacceptable. 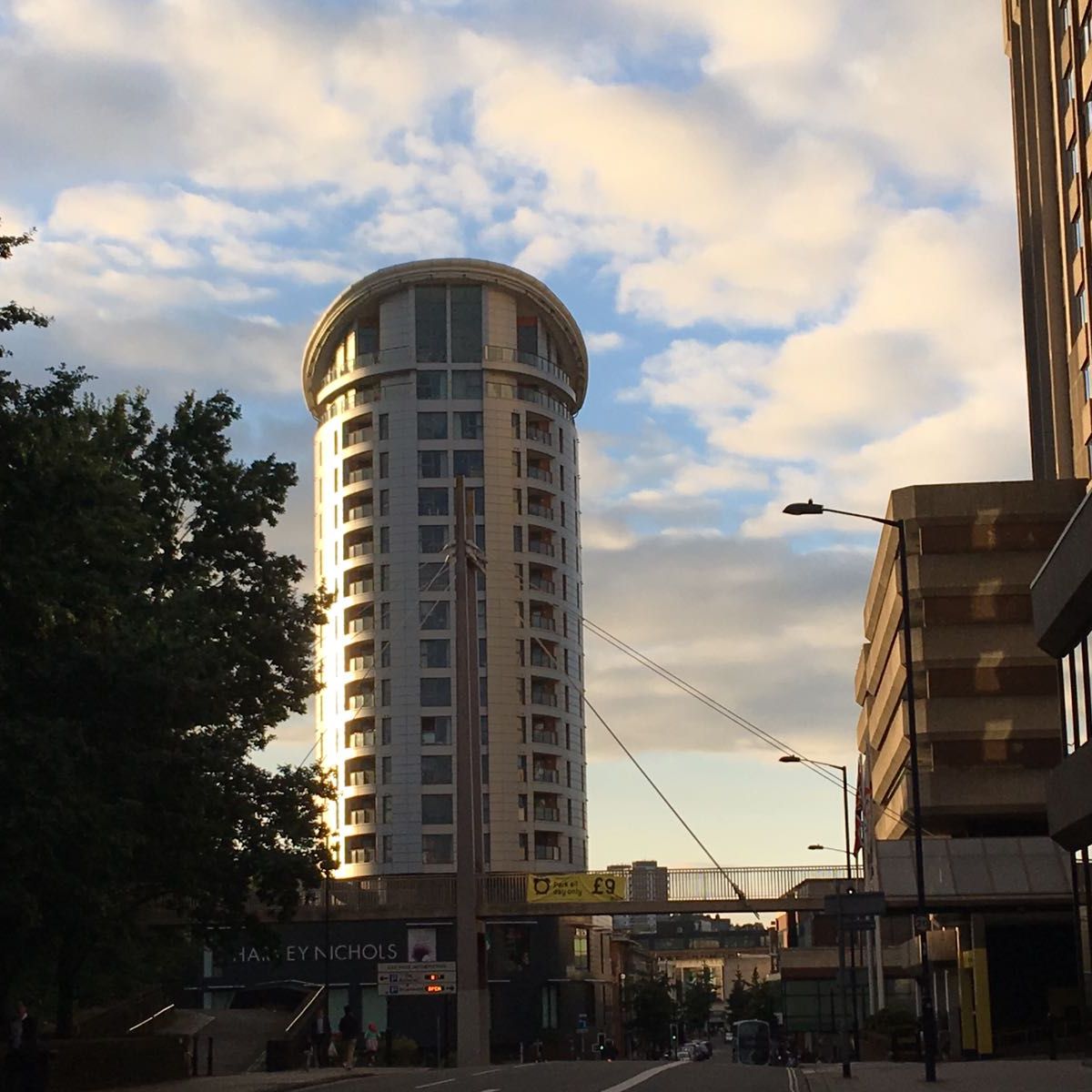 The Elipse Tower in the town centre has Grenfell like cladding

The Hotwells & Harbourside Liberal Democrats support the 10 demands of the End Our Cladding Scandal campaign and are calling on both the Government and the Mayor of Bristol to work together to immediately ensure properties are made safe and none of the remediation or associated costs are passed on to leaseholders or residents in Bristol.

Lib Dem Candidate for Hotwells & Harbourside Alex Hartley said 'It is scandalous that residents are facing potential bankruptcy to make their homes safe to live in.There is suspicion that multiple building around the Harbourside may be affected. It has been three years since the Grenfell Fire Disaster, which was such a tragic loss of life.  We need action now to protect the residents of Hotwells & Harbourside from the same fate, whilst not allowing them to fall into financial ruin covering remediation costs." 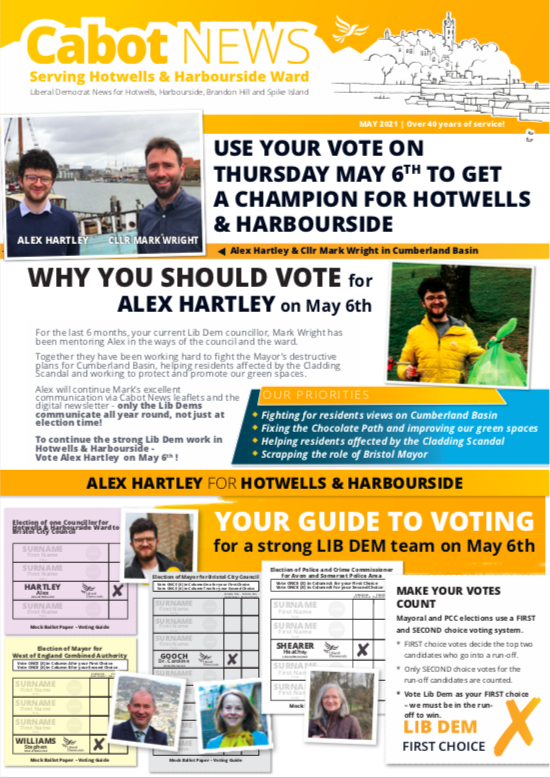 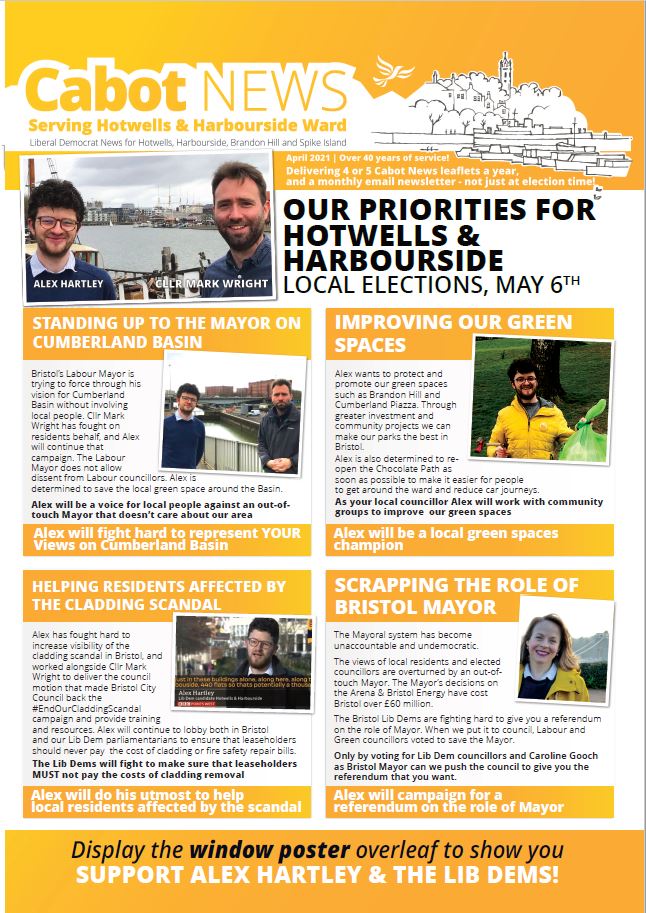 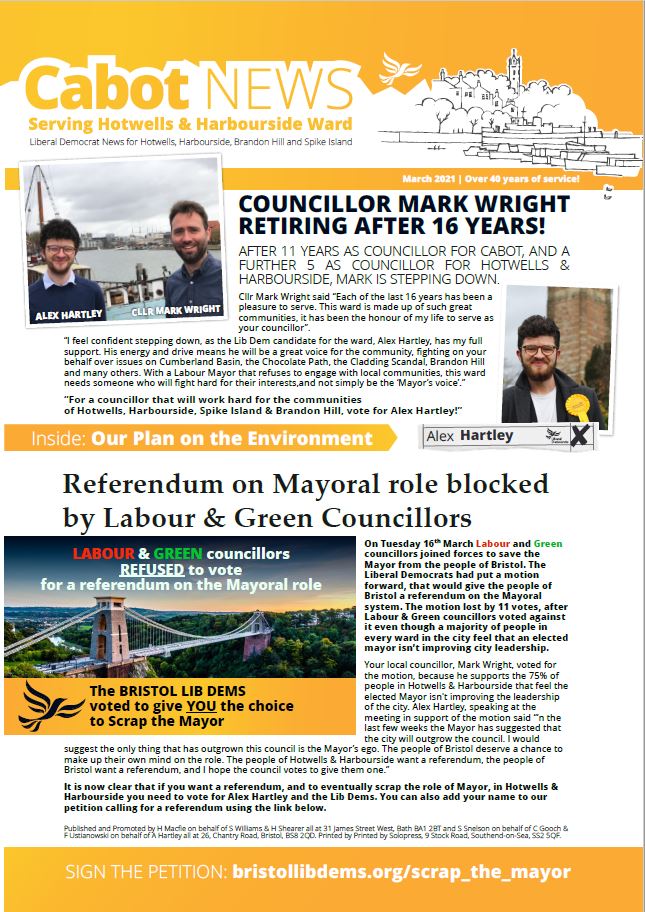 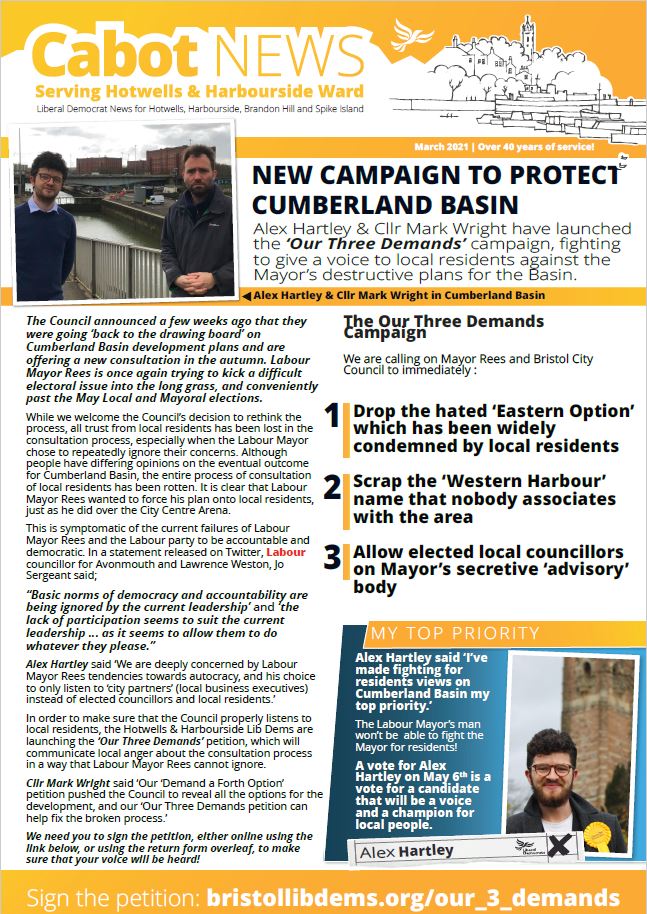 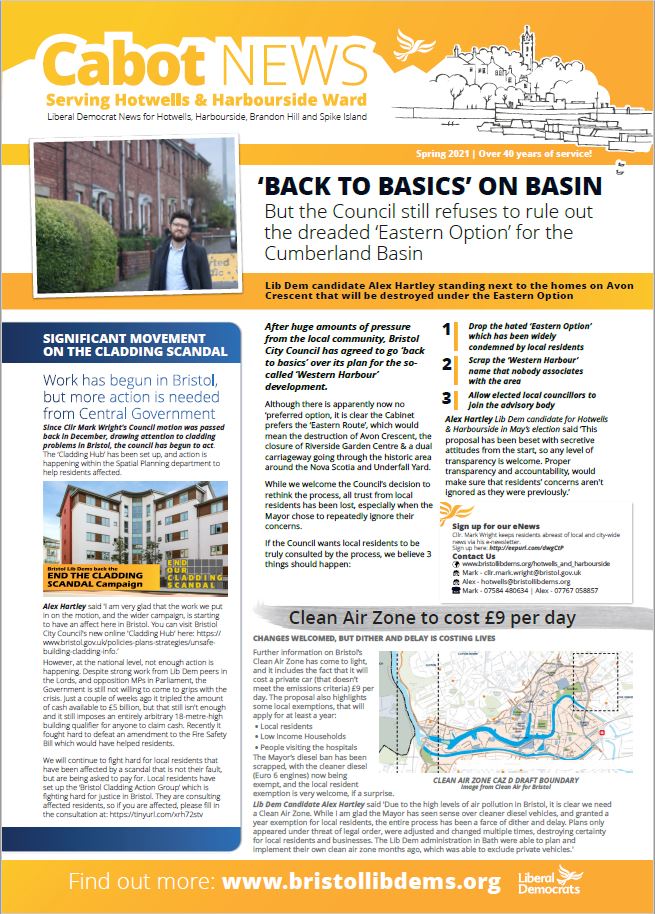 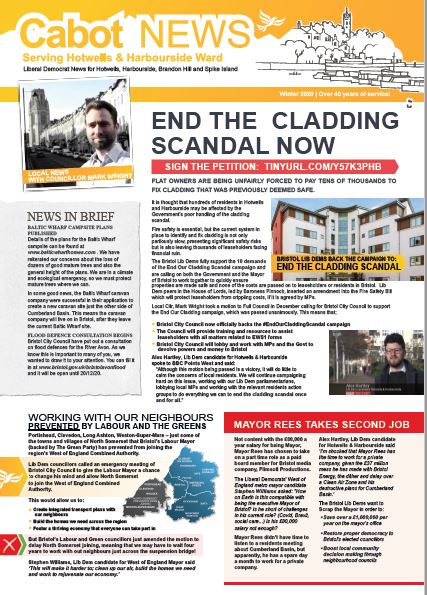 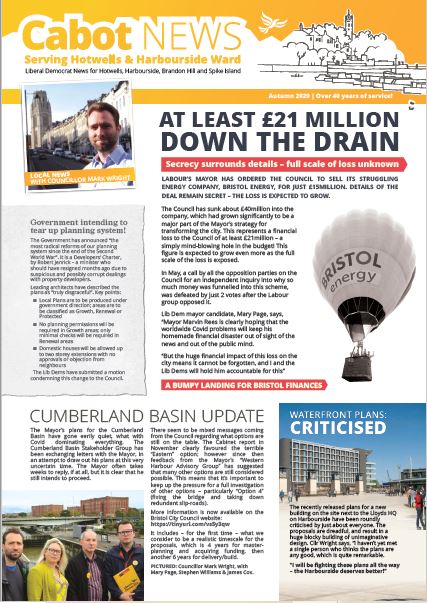 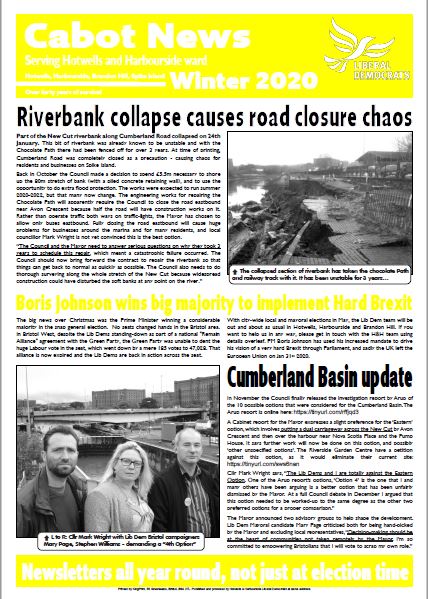