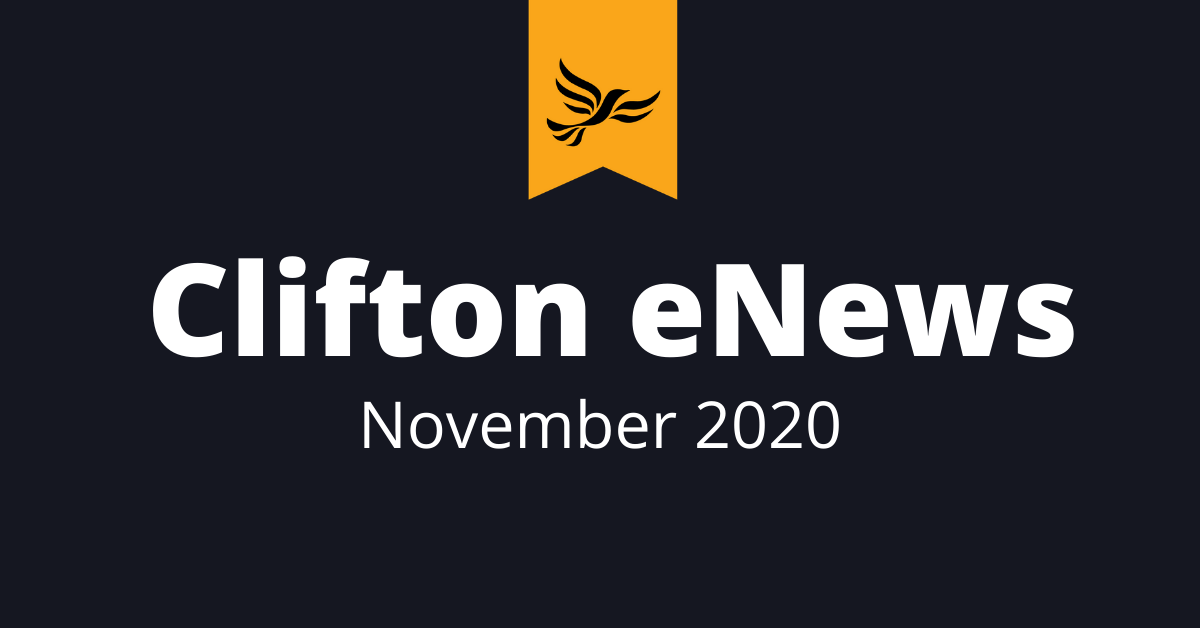 With the country back under lockdown, the Liberal Democrats are urging the government to support those most affected, and get a grip on test and trace.

The Liberal Democrats have supported the lockdown because we believe that it is the only way to get the virus back under control in time for Christmas. The Prime Minister must also come good on his promise that all four nations will come together with a proper plan for the coming months, so that families can safely be together and the festive season can be as normal as possible.

But the Government must use the time wisely. Boris Johnson must show that over the next month that the Government are overhauling the test, trace and isolate system, so that anyone who wants a test can get one - and anyone who is forced to isolate is given the support they need to keep on top of their finances.

If you feel stranded by this latest lockdown, please get in touch if we can help with collecting shopping or prescriptions.

The Mayor of Bristol is about to block £900 million of funding for housing and transport, according to the Mayor of the West of England.

Transport and housing policy in the Bristol region is led by the West of England Combined Authority, with a directly elected metro-mayor. When originally established, the Conservatives on North Somerset Council (the other side of the suspension bridge) backed away from the arrangement, leaving a hole in the administration. Now with a Lib Dem/Independent administration, North Somerset are finally seeking to join – but the Labour mayor of Bristol is trying to keep them out!

The inclusion of North Somerset in the West of England had long been hoped for by the other areas, including South Gloucestershire and Bath & Nort East Somerset Councils, which are supportive. Bristol has also indicated their support, with a plan about to be signed off by government ministers. However, the Labour mayor of Bristol has inexplicably U-turned at the last minute.

The leaders of the three other councils, and the metro-mayor, believe that the Bristol mayor is acting for party political reasons. Without North Somerset at the elections next year, Labour might have a better chance of winning. Either way, the other council leaders believe that this decision is about to cost our region £900 million in lost investment.

The shambles illustrates the absurd situation of Bristol’s spare mayor. The Liberal Democrats are supporting Stephen Williams, a former government minister, as our credible candidate for metro mayor, while seeking a referendum to abolish the position of directly elected mayor of Bristol.

Having previously questioned the cabinet member responsible, Nicholas Coombes has now made a statement to the Full Council about the situation. You can read the full statement here. He has asked that renewal reminders are recommenced, and for reimbursement of charges for those unreasonably penalised.

Residents from across Clifton have taken the time to respond to the Lib Dem’s local survey. We’ve been listening to what they had to say:

Survey participants think that the most important local issues are pavement and road maintenance, followed by parking. Clifton Lib Dems are continuing to report broken pavements and potholes to the council for repair, and have had some success across our area. You can report street issues too at fixmystreet.com. I am also campaigning on residents’ parking permits, to fix Labour’s renewal notice mess.

Across the city, the most frequently raised issues are improving public transport and congestion, and the environment and sustainability. As an infrastructure planner, I think I am well qualified to address these issues if elected as a councillor. I am also supporting Stephen Williams, the Lib Dem candidate for regional mayor, who has detailed plans for new suburban stations and taking control of buses. The Conservative incumbent has been almost invisible on these vital issues of sustainable transport and planning.

In Clifton Village, many were pleased with the new street arrangements, but lots wanted to go further with pedestrianisation of Princess Victoria Street or The Mall. Having enjoyed dinner on street in The Mall over the summer, I am certainly sympathetic to full pedestrianisation and want to investigate this further.

On the Cumberland Basin, survey responders were clear that they oppose the mayor’s plans. Bristol Liberal Democrats agree; the mayor’s published options put too much emphasis on traffic and development, and do not prioritise the effects on noise or the environment.

Finally, most think that Bristol’s executive mayor system has served us poorly, and would vote to abolish it. The Liberal Democrat’s candidate for Mayor, Mary Page, is leading the call to scrap the position, and would instigate a referendum to remove her own post if elected.

The survey is still open for your views at bristollibdems.org/clifton

We don't know how the world will look when the vitally important Bristol elections take place in May. So, now is the time to think about how we can protect our votes.

Joe Biden’s historic win in the US has shown how important postal votes can be, allowing millions of people to vote ahead of time, at their convenience and in a Covid-19 secure way.

Anyone can apply for a postal vote by going to www.bristol.gov.uk/voting-elections/postal-voting.

All you need to do is print out, complete and return the application form, either by post or through the website. This simple step will mean that whatever is happening next May you'll be able to have your say in the elections.

If you'd like to know more about our work and the goings on in City Hall then look out for our paper newsletters delivered around Clifton Down or follow us online on Facebook or Twitter!